It was a year before he died. I used to work in Chennai those days and had gone to Thrissur on a holiday. The tube-light in the dining room was not working, and my father asked me to check it out. It seemed that the starter was dead. I got ready to leave for the store to buy a new one.

Father stopped me. He asked me to follow him to his study. His lung disease had progressed by then and he panted with the excitement of the effort. He took out a brown paper cover from inside a plastic box and said, "try one of these, it may work." I turned the brown paper cover to loosen the rubber band and saw his label for the contents inside the cover - 'Dead starters'.

My father was born in 1917, the year Indian soldiers who fought for the British in the First World War returned to their villages. Just two years before he was born, Mohandas Karamchand Gandhi, an Indian lawyer had returned from South Africa. Though not as an active participant, he had lived through the freedom movement and World War II. He had experienced scarcity, rationing and queues. For him there was nothing wrong in coaxing a dead starter to work for a few more months.

Though the economic reforms were initiated in 1991, in 1995 (when my father tried to resuscitate starters) the Indian economy was not soaring. But even by then the use and throw culture was slowly coming into practice. Summer this year, when I had parked my Maruti 800 in Swaraj Round, Thrissur, I found a friendly message hanging from my rear view mirror. "Exchange your old car for a new Nissan Micra," it read. Just like that?

High domestic production and high domestic consumption is good for the economy. It is better than the export-led economies (like in South-East Asia before the crash of 1997), or the import-led economies (like in much of Africa). However, when consumption becomes an end in itself, when today's goods and services are bought from tomorrow's expected earnings, there could be danger ahead.

I was a journalist when Sir Richard Jolly, lead author of the 1996 Human Development Report which focused on 'consumption', came to Chennai to release the report. Explaining the concept of consumption to us, Sir Richard said that when the human waistline expands beyond 34 inches then the problems due to consumption starts. I presume the conceptual 34-inch waistline also exists for national economies.

Mall owners in Chennai today will assure me that waist size does not matter. They have jeans for all sizes. They also have jeans of all brands. They have enough jeans chasing my money.

This summer the contrast was yet stronger for me, since I was coming to Chennai from Cotonou in Benin, West Africa. In Cotonou, good money has to go chasing for goods and services. In fact, the city has a used-jeans market. I do not know how the supply chain to this market works, but I would not be surprised if the jeans used and put aside in Chennai would find their way here through a network of international traders.

India comes 145th on the list in terms of per capita emissions, keeping pace with Georgia, Gabon and Angola. Qatar takes the top position with 53.5 tonnes emissions per capita in 2008; the USA in the 12th position with 17.5 tonnes; and the UK in the 43rd position with 8.5 tonnes.

When the country figures are listed, India comes third after China and the USA, and fourth if the European Union is counted as a block. Despite the ranking, the differences are considerable. In 2008, China had an emission of 7.03 billion tonnes (23.33% of the global total); the USA 5.46 billion tonnes (18.11%); the EU 4.17 billion tonnes (14.04%); and India 1.74 billion tonnes (5.78%). This data and analysis was made by the Carbon Dioxide Information Analysis Center of the US Department of Energy for the United Nations.

This is the data on which the entire India vis-à-vis the world climate change discussion revolves. There are two ways of looking at it. While one can argue that India is a major emitter, the counter argument is that a country with 17.28% of the world population only shares 5.78% of the emissions, and global warming is caused due to present and historical emissions. India's economic growth and increase in emissions is a recent development. The per capita emissions is amongst the lowest in the world.

I do not know how much of these arguments my father would have read through the newspaper. Even if he had, his philosophy would have been simple - if a tube-light starter can be brought back to life it should not be thrown away.

This year Maveli is coming to Cotonou in Benin, West Africa. We are preparing to receive him on Sunday, 11 September.

Maveli is a good man, very considerate. He meets his people on a day of their convenience, rather than his. On Sunday his calendar should be full. I am sure as the earth turns he would be coming from Perth, Singapore, Dar  es Salaam to Cotonou. After shaking our hands he may be going to Accra, London, Chicago and San Francisco.

I am grateful, my King. We are humble immigrants, peripheral statistics in the global pool of migrant labor.

I left Kerala in 1987. Since then I have welcomed Maveli at New Delhi, Chennai, Hyderabad and now Cotonou. Many a year I have welcomed him at home, along with my family. Some years I have done it with friends, in a larger gathering.

At one such gathering, one of my friends asked me a question. "Did Parasurama throw an axe to reclaim Kerala from the sea?"

"Dashavatara says that Vamana came before Parasurama. Then how would it have been possible?" my friend persisted.

The point, of course, is not to check the historical veracity of mythological stories but to imbibe the spirit that they convey. In almost every part of India there are two major celebrations in a year. Call them Onam-Vishu, Diwali-Holi or Diwali-Pongal, these are post-harvest festivals where historically a predominantly agrarian society thanked the Gods for a good return on investment.

We have moved from agrarian to industrial to service sector economics, but maintain these celebrations that remind us of our gratitude to the soil of our land. An IT professional, doing a project in India for a company in the USA, has very little connection to the soil or the harvest. But he joins in because the celebration of the day links him with every other Malayali in the world, and also to his forefathers who celebrated this day every year during their lifetimes.

My first Kerala Onam experience was in 1976. My father had retired from government service in Madhya Pradesh and had bought our home in Thrissur. He was keen that his children experience the real Onam. We made Thrikkakara Appan in clay and laid the floral design in front of the steps leading home.

Only once did I return to Kerala for Onam after I left in search of employment. It was in 1991, the first Onam for my son, and like my father before me I wanted him to experience it. He was too small and may never remember that day, but I could not fail in my duty of baptizing him as a Malayali.

In 1976, the going rate for a Kummattikali performance was 10 paise. I knew that many boys went around the corner, changed into a new mask and returned as a fresh Kummatti.

Today perhaps there are not that many Kummattis in Thrissur. It is not worthwhile to perform at the bottom of a multi-storeyed apartment block. Who watches? Who pays? Today's equivalent of Kummattikali are the Onam special programs on Asianet and the umpteen other television channels in Kerala. People watch. And since they watch the advertisers pay.

With satellite links some of these channels are watched by Malayalis all over the world. These programs make the Malayali diaspora yearn for the land of mountains, rivers, backwaters, lagoons and beaches that they left behind. This 590-km long thin (it is 150 km broad at the broadest point) strip of land  has the tallest mountains in India after the Himalayas. Forty-four rivers start from these mountains, with 41 flowing west into the Arabian Sea. A mesh of tributaries and distributaries cover the state.

Historically, Kerala was the landing point for all those who sailed from across the Arabian Sea, making it a cultural and religious melting pot. Apostle St. Thomas sailed to the coast a couple of decades after Christ's Crucifixion, and his followers were among the earliest Christians in the world. He is said to have landed near the present-day Kodungallur, the town in which one of the earliest mosques was built in the country. Buddhism, Jainism and Judaism were also practiced in Kerala.

In the mid-1990s, the Kerala Tourism Department started marketing this beautiful and rich land as "God's own country." As a journalist, I listened to officials talking about packaging and promoting the state to the discerning global traveler. They were right - Kerala is known across the world today.

However, the strongest ambassadors for the state have always been those who traveled out in search of employment. Good education and paucity of opportunities were the push factors. One fine day, early in his life, my father caught a train to Mumbai. He returned only when he retired from active service decades later. My wife's father sailed to Malaysia, carrying his hopes and a steel trunk. A generation later in 1987, my friends saw me off in a train out of Kerala.

Raji and I were on a tourist coach in Dubai in the summer of 2009. We were driving into Palm Jumeirah. The Pakistani guide was talking about the engineering adventure, and how it had attracted the rich and the famous from across the world. He mentioned something about Shahrukh Khan. We overtook an Ashok Leyland bus with windows open. The workers inside looked mostly Malayalis.

Maveli, my King, this Onam please give joy to them, and to all of us staying inside and outside your kingdom.

There is a road along the beach connecting the city of Cotonou to the historic town of Ouidah in Benin. Some pictures. 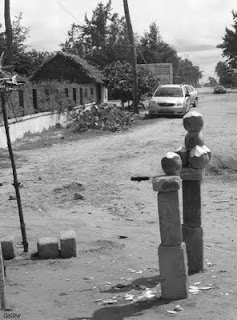 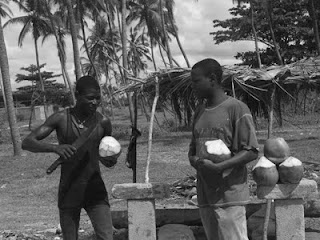 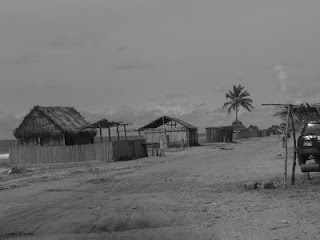 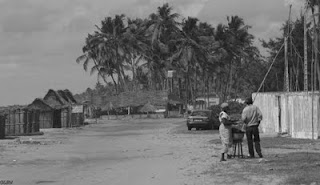 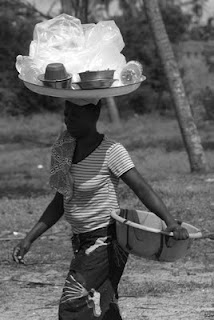 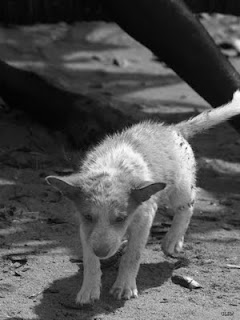 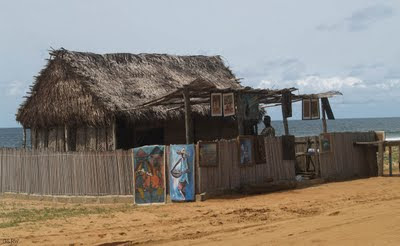