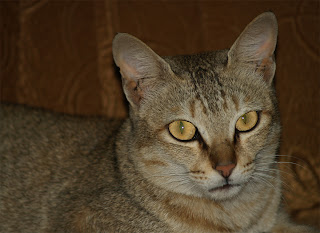 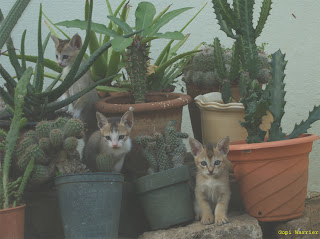 From the time we moved into the ICRISAT campus quarters in August 2003, we were never short of feline company. Ashley (top picture) was the first to join us in September of the same year. She delivered a litter of kittens after every mating season. The current crop (bottom picture) are growing up secure in our yard. They are (from left to right) Honey, Candy and Toffee. Toffee is the tom cat, rogue.

Almost at the time Ashley appeared, a grown male cat also appeared. Varun, my son, called him Gundu. Gundu's partner was Ashley's enemy, called just that. Gundu and Enemy produced a lineage, whereas here Ashley and her Boyfriend produced another. One of the earliest lots from the Ashley-Boyfriend partnership were three kittens - Snowflakes, Bruno and Aerial (so called for his/her penchant for climbing). Aerial disappeared one day, Bruno was gifted to our neighbour, where he has grown to a handsome young male, and Snowflakes is also a handsome male with long legs in the lookout for good-looking females. Snowflakes and Bruno befriended two of Enemy's children - Ching Ming and his sister. Boyfriend in fact is Enemy's brother.

In the next litter Ashley delivered another three - Silver-Moonbeam, Mixed-Pickle and Dark-Chocolate. They disappeared one by one mysteriously. The current crop is growing, rearing to face life.

In the meanwhile, Gundu competed with Boyfriend for territorial supremacy. He routinely chased and bit Boyfriend, till one day when Boyfriend was cornered he fought and realised that unknown to himself he was stronger than what he had expected. Gundu sulkingly disappeared from the scene. Now Boyfriend continues the tradition by attacking Snowflakes and Bruno.

Boyfriend and Ashley fell apart. Why I don't know since I am not tutored in cat psychology. Last seen, Boyfriend was dating Enemy's daughter. A case of avuncular love.
at Saturday, January 12, 2008